Baijiu (白酒) is distilled liquor made primarily in China using grains. When translated from Mandarin, the name baijiu means transparent (白, or bai) alcoholic drink (酒, or jiu). Whilst baijiu remains the most commonplace name for the beverage, it is also sometimes referred to as samshu, baigan (白干), or shaojiu (烧酒, aka fired liquor).

The discovery of baijiu has never been formally dated. However, it is believed that the drink can be traced to the 2nd Century BCE. Baijiu rose to prominence and popularity during the Yuan and Ming Dynasties. Since then, baijiu has played a hugely important role in Chinese society and customs. ( See Drinking Baijiu – Chinese Customs & Traditions) As a result, baijiu has gained a reputation as the national drink of China. Baijiu is so popular in it’s native country that it accounts for 99.6% of all spirit sales in China. To this day, baijiu is consumed throughout the country, often alongside meals. Baijiu also plays a pivotal role in business trading, and personal celebrations. This popularity makes baijiu the most popular alcohol in the world in terms of production volume. The National Statistics Bureau of China estimates that around 12.9 billion litres of baijiu are distilled each year. This is more than vodka and whiskey combined. Read More – What Is Baijiu? 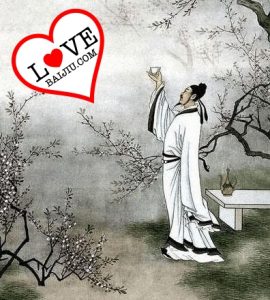 The Story Of Baijiu

Alcohol has long played a role in Chinese culture. This is because China was the first nation to discover, and create, alcoholic beverages. Although once considered the reserve of the aristocracy in China, alcohol became increasingly available to the proletariat throughout the country’s history.

The first example of alcohol dates back to around 7,000 BC. Wine was invented in the town of Jiahu, located in the central China province of Henan. This wine was brewed using grapes, rice, honey for sweetness, and hawthorn fruit.

The intoxicating effect of this beverage was not anticipated or understood by the ancient Chinese. As a result, the citizens of the time believed that wine was a transcendent experience. The people of China would drink this liquid and believe that they were communing with the spirits of the dead and ancient deities. Read More – The Story Of Baijiu 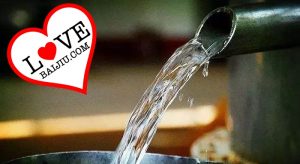 How To Make Baijiu: The 7 Steps

The production of baijiu is very important to Chinese nationals. Distilleries are located all over the country, in a number of different provinces. Every distillery produces their own, distinct form of baijiu. In many cases, the recipes for a particular baijiu are passed down from generation to generation.

While tradition is important to the manufacture of baijiu, the industry has embraced modern technology. The distilleries of the past would use organic materials such as wood and bamboo, transporting ingredients in wheelbarrows. In the 21st Century, however, cranes and scientific apparatus have been embraced. Read More – How To Make Baijiu: The 7 Steps 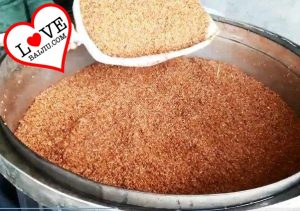 The ingredients of baijiu are hugely important. There are three main ingredients to any baijiu. These are water, jiuqu (酒曲, pron. joo-choo) and grain. An old Chinese proverb claims that, “Water is an alcohol’s blood, qu is its bones, and grains are its flesh.”

In addition to these core ingredients, many manufacturers infuse their baijiu with herbs. This adds new and distinct flavors and aromas to the spirit.

The water used to make baijiu must be clean, and of high quality. Many distilleries draw water straight from a natural source, such as a stream. The Chishui River is often considered China’s purest water source. Read More – Baijiu Ingredients 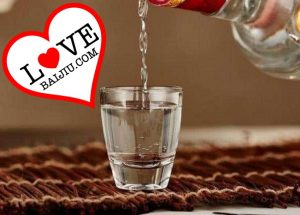 Baijiu is not a brand name, but instead a catchall term for a wide variety of Chinese spirits. There are four primary categories of baijiu: Strong Aroma, Sauce Aroma, Light Aroma and Rice Aroma. Within these definitions, however, there are a number of smaller sub-categories.

Geography also plays a part in which baijiu is created, and where. Rice Aroma baijiu, for example, is exclusively produced in the south of China. This means that other parts of the country struggle to obtain this type of baijiu. The opposite is true of Light Aroma baijiu, which is native to the north of the country. Read More – Baijiu Aroma Types 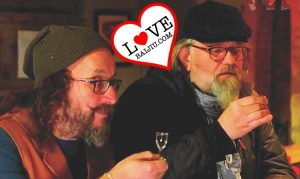 How to Drink Baijiu

Baijiu is the most popular spirit in China by a considerable margin. This means that baijiu will be served at all meals, state functions, celebrations and business transactions.

There are a number of formalities that should be observed when drinking baijiu. Failure to recognise these expectations can often lead to offence. This can be avoided if the correct protocol is followed.

Baijiu should always be served at room temperature. If the baijiu is warm, this is also acceptable. Baijiu should never be chilled.

The room temperature baijiu should be poured into a small, ceramic pitcher. From here, the spirit will be poured into small, specialist glasses. These resemble shot glasses in size, but are different, distinct, vessels. Read More – How To Drink Baijiu 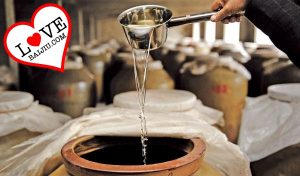 Baijiu is the most popular spirit in the world, in terms of units sold. Despite this, most non-Chinese nationals know very little about it. See below for some of the most frequently asked questions about baijiu.

How Do I Pronounce Baijiu?

Baijiu is pronounced By-Joe in English. This translation of the Chinese-language word, which means, “clear liquor.”

Is Baijiu a Brand Name?

No, baijiu is the name of a spirit. However, this puts it on par with rum, vodka or whiskey. There are many different brands of baijiu available. Read More – Baijiu FAQs 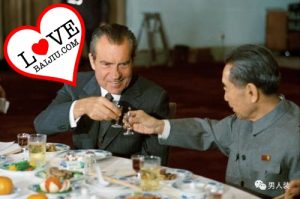 Chinese nationals take alcohol very seriously. Since the dawn of time, alcohol has been very important to the people of this country. In the earliest eras of Chinese history, alcohol was considered a luxury only applicable to the most prestigious members of society.

Soldiers would drink wine to toast a military victory and the vanquishing of an opponent, and civilians deemed worthy of an audience with the Emperor would be entitled to sample this nectar.

The introduction of baijiu changed the approach to alcohol in China. In modern times, anybody can – and does – enjoy access to this spirit. There are a number of societal and cultural norms and can and should be observed, however. Failing to follow these guidelines can be seen as a lack of respect by a Chinese national. Read More – Baijiu Drinking Culture 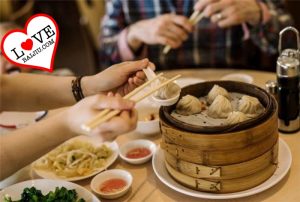 The Best Food To Accompany Baijiu

Baijiu is often considered a social drink, and it plays a large part in most Chinese business deals. A willingness to drink baijiu demonstrates a high alcohol tolerance and strong constitution. Many Chinese nationals will take this is a sign that you are prepared to sacrifice western ideals, and do what is necessary to respect the customs of your host.

Baijiu is not only a spirit that is associated with binge drinking, however. Many families enjoy baijiu at mealtimes in the home. In addition, baijiu will often be served with a business or state dinner.

The first exposure of many western patrons to baijiu will come through pairing the drink with food. This is particularly advisable for first-time baijiu drinkers. The strength and potency of the spirit can be intolerable when consumed as a straight shot. Combining baijiu with food softens the strength of the alcohol, and allows an unaccustomed stomach to digest it better. Read More – The Best Food To Accompany Baijiu 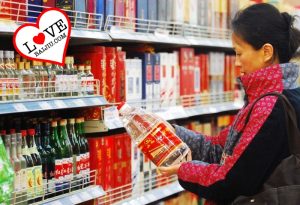 Baijiu is the top-selling spirit in the world. However, baijiu itself does not refer to a particular brand. Instead, the name baijiu covers a broad spectrum of different translucent spirits throughout China.

Every region of China has its own baijiu distillery. As a result, the residents of these territories have their own preference of baijiu. These may vary between different aromas (See Also: Types of Baijiu).

What makes the best baijiu depends on the desires and needs of the individual. Some baijiu enthusiasts look for a brand that pairs well with a particular food. Similarly, some prefer a baijiu that is very strong, while others will prefer something lighter and more fragrant. Read More – Baijiu Best Brands Top 10 Most Popular 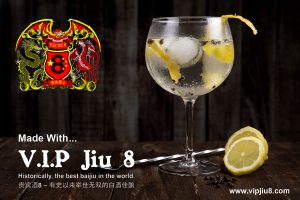 There has been a lot of interest in cocktails this year, old recipes have resurfaced and new ones have appeared. So I am going to take out the hard work of accumulating a well stocked cocktail bar and go with a contemporary slant, instead of all the antiquated equipment associated with cocktails. Welcome to the twenty first century baijiu cocktail.

Your new friends will be fruit syrups, soda water and clear fruit flavoured waters, which I first tried in the baijiu mixer section and they worked really well, also the shaker for flair. As for the container for your drink, I will let you choose, what ever receptacle is convenient. The measurements are a guide line only, add or subtract whatever your own taste demands. So without further ado lets make some V.I.P Jiu 8 baijiu cocktails. Read More – Baijiu Cocktails: Make Quick Simple Easy Cocktails With Baijiu 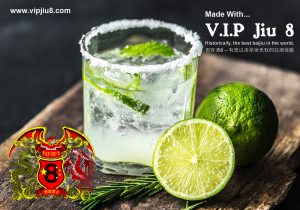 There has been a surge of information written, as the good old fashioned cocktail has been resurrected, old and new recipes have emerged in their thousands and in the wake of the euphoria the mixer soft drinks have been designated to a minor roll. So I am putting together some streamlined mixed drinks for the modern person who does not have the time or inclination to become a bartender, nor wants to amass the paraphernalia of a well stocked cocktail bar, but simply wants to relax and enjoy a drink.

V.I.P JIU 8 mixer recipes are designed with that in mind. Any glass or ceramic container can be utilised from a jam jar to a designer goblet. What counts, is not the container, but the contents.

Store bought soft drinks are cheap and plentiful and there are some nice exotic brands out there. Just google flavoured soft drinks and you will be surprised at the choices you have, either in bottles, cans or cartons.

Funky ice cubes are a fun way to add colour to your drink and are easy made, just add bits of fruit or flower heads to your ice making tray, fill with water, then when ready add to your drink.

I have suggested 1½ fluid ounce of alcohol, but you can add or subtract according to your taste. Also I will leave it up to the individual whether to use a straw or not. So relax with a V.I.P. JIU 8 and mixer. Read More – Baijiu Mixers: Make Quick Simple Easy Baijiu Mixers